Government of India
Ministry of Railways
Railway Board

Sub:- Recognition to the Game of Judo for the purpose of recruitment of sports persons against sports quota.
Ref.: (i) Railway Board’s letter No~ 2010/E(Sports)/4(1)/1(Policy) dated 31.12.2010 (RBE No. 1898/2014).
(ii) Railway Board’s letter No. 2011/E(Sports)/4(1)/1/Policy Clarifications dated 27.03.2012 (RBE No. 42/2012).
During the 70th Annual General Meeting of the General Council of Railway Sports Promotion Board, held in Rail Bhavan, New Delhi on 17.10.2014; it was decided by the house to include the game of Judo in the list of RSPB recognized games for the purpose of recruitment, participation, incentives etc.
2. The proposal has accordingly been considered and approved by Railway Board. It is accordingly advised to insert the game of Judo in the list of recognized games, as mentioned under Para 2.7 of Board’s policy letter (dated 31.12.2010, referred to above; for recruitment, participation, incentives etc. to sportspersons against sports quota, with immediate effect.
3. This issues with approval of Board (MS). 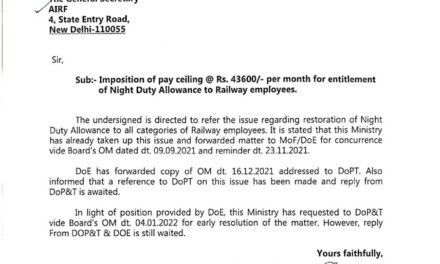 Imposition of pay ceiling @ Rs. 43600/- per month for entitlement of Night Duty Allowance to Railway employees