The matter regarding grant of Special Casual Leave to Railway employees who could not attend duty due to hudhud cyclone which badly affected the coastal areas of Andhra Pradesh and Odisha States in the week of October, 2014, and the flash floods in the State of Jammu and Kashmir, was taken up by All India Railwaymen’s Federation(AIRF).
The issue has been carefully considered by the Board and it has been decided that Special Casual Leave upto a maximum of three days may be granted to the affected employees who stay at places far away from their Headquarters, as a result of which they have to commute a long distance to their office, and due to dislocation of traffic arising out of the aforesaid natural calamities they were not able to undertake the journey and report to the f!eadquarters for duty.
This issues with the concurrence of the Finance Dte. of Ministry of Railways. 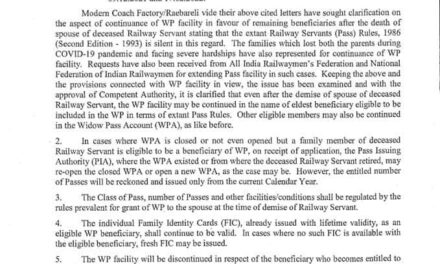