GOVERNMENT OF INDIA
MINISTRY OF RAILWAYS
(RATLWAY BOARD)

The General Managers,
All Indian Railways including Production Units.

Manpower planning requires continuous review of sanctioned strength in view of changes in technology, working systems and redundancies. It is also necessary to plan judiciously to meet the requirement of posts for manning and operating new assets, especially in safety categories. Hence in respect of currently identified redundancies, there is a need to identify and maintain a “Pool of Surrendered Posts”. This will help avoid initiating any recruitment action, even inadvertently, for the posts put in this surrendered pool. Existing instructions provide for creation of posts through matching surrender and by utilizing the money value available in the Vacancy Bank with the Zonal Railways/PUs etc. In cases, where the Zonal Railways/PUs are unable to provide money value on their own, proposals are required to be sent to the Railway Board.
Powers had already been delegated to DRMs to meet the requirement of posts in safety and operational categories for new assets on a I : I basis, with the approval of the General Manager vide letter No.E(MPP)/2003/1/88 dated 05.04.2006 (RBE No.45/2006).
In order to empower the Zonal Railways to meet the requirement of additional posts for new assets and for safety and operational activities within their own resources and taking recourse to the above new concept of “pool of surrendered posts’, the following instructions are issued. These powers are to be exercised by judicious review of existing and required manpower.
(A) Identification of “Pool of Surrendered Posts”
i) At the beginning of every financial year, each GI4/DRM shall carry out a Zero Based Review of all posts appearing’in the Book of Sanctions, the total workload and decide in consultation with PHODs/Branch Officers, as the case may be, the posts which are required to be operated and the posts.which are not required to be filled up immediately or are not required to be operated. Such vacant posts should be identified with due diligence and these should be segregated from BOS and shown in a separate “Pool of Surrendered Posts”. Concurrently, surrender memorandum duly indicating therein the Division/Unit, Department, Category/designation of the post, Pay Band,
Grade Pay, the date of credit to this Pool, without indicating money value of the post surrendered for those segregated posts, may also be issued before adding the same to the surrendered pool. lf some such posts are currently filled up, action needs to be taken as per para (B) below.

(ii) Posts which have been lying vacant for long periods and for which no indents have been placed and are no longer required to be filled up as per current needs should also be included in this “Pool of Surrendered Posts” and taken out from the Book of Sanctions (BOS) by issuing surrender memorandum as mentioned above. All these posts shall be maintained in the “Pool of Surrendered Posts”. Recruitment action against these posts shall not be initiated.
iii) This exercise should be completed in respect of all departments and categories controlled by the Division/Railway, within the first month of the financial year i.e by 30th April every year.
iv) A similar exercise to identify the vacancies should be continuously undertaken in the PUs also and posts identified which are no more required, either due to phasing out/modernization of production line or outsourcing. These posts should also be taken out from BOS and shown in “Pool of Surrendered posts” and concurrent surrender
memorandum issued as mentioned above. The money value of these posts can also be utilized to create the posts in safety/operational categories for new assets/new PUs/expansion of existing PUs in the same manner as explained at para ( C ) below.

v) While identifying “Pool of Surrendered Posts” as above, it may be ensured that promotional prospects of the existing employees, who are having avenue of promotion to these posts as per recruitment rules, are not adversely affected.
vi) Once identified, certification of “Pool of Surrendered Posts” and revised Book of Sanctions along with issue of surrender memorandum as mentioned above will be done by Personnel and Accounts officers.
vii) A Register listing posts in the “Pool of Surrendered Posts” should be maintained, duly indicating therein the Division/Unit, Department, Category/designation of the post, Pay Band, Grade Pay, the date of credit to this Pool and date of debit from this Pool, by way of withdrawal/redesignation along with suitable remarks and signed yearly by the Personnel and Accounts Officers. The format for this register is enclosed as Annexure.
Creation of Supernumerary Posts
The posts which may be manned, but which may not be needed or will not be needed in the near future, should also be identified and converted into supernumerary posts. Supernumerary posts should be created for not more than 6 months and the surplus staff should necessarily be re-deployed within this 6 month period. For such of the supernumerary posts, where surplus staff are re-deployed within this 6 months period, the substantive posts can be put in the ” pool of surrendered posts” and other posts may be created only in Safety/Operationfll categories as are needed for new assets, without routing it through the vacancy bank as per procedure indicated in para (C) below.
Utilisation of “Pool of Surrendered Posts” and supernumerarv posts
i) The posts included in the “‘Pool of Surrendered Posts”, can be used to create safety category posts needed for new assets only. In no case can it be used to create non-safety category posts. Posts cannot be withdrawn from this ‘Pool’, to meet statutory requirements or for Vigilance or Security organizations etc, as Railway Board alone is competent for creation of posts in these departments.

iii) In a Division, utilisation of pool of surrendered posts as per ‘A and ‘B’ above and creation of new posts in various grades as per requirement within a unit or from one Unit to another or from one Department to another, can be done by DRMs with concurrence of associate Finance. This will now not require GM’s approval, as was required by Board’ s Letter No.E(MPP) 12003 I I I 88 dated 05. 04 .2006 (RBE No.45/2006).

iv) Utilisation of posts included in “Pool of Surrendered Posis” from one Division/Workshop to another Division/Workshop can be permitted by GM with concurrence of associate Finance.
v) Board can also order transfer of money value by surrender of posts from “pool of Suffendered Posts” from any Zonal Railway/PU to another, when Board decides that the
Recipient zonal Railway/PU is in need of the same for creation. vi) Requirement of posts for new Production Units and Workshops which have come up recently, will be met fiom Vacancy Bank of the Railways as ideniified and ordered by the Board.
vii) Posts identified for surrender by Railway Board or identified for surrender due to Work Study Reports, shall not be used for creation on the basis explained in para (C) herein. On surrender, their money value shall continue to be crediied to the Vacancy Bank as per extant orders with 25%;o share going to Railway Board.

viii) The accountal of the posts in the “Pool of Surrendered Posts” will be maintained by the CPO for the Zonal Railway/PU and the ST.DPO for the Division, as the case may be. The proposals shall be processed by the Personnel branch and routed through Associate Finance at Divisionslzonal levels as the case mav be.
(D) GENERAL
i) The recognized Unions/staff council may be kept informed. ii) This issues with the concurrence of Finance Directorate of the Ministry of Railways.

Brief of the meeting held today with Hon’ble Minister for Railways, who is also looking after the portfolio of MOF

Discontinuation of interview/viva-voce for direct recruitment in Railways 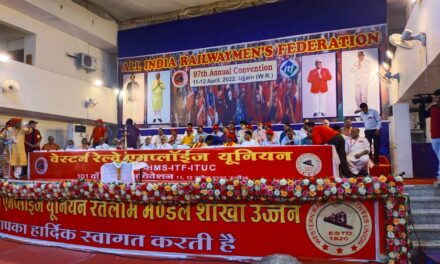 Observance of “All India Protest Day” on 14th December, 2016