References are being received from Zonal Railways seeking Board’s approval for request transfer of railway employees with lower priority, on out-of-turn basis. After careful consideration of the matter. Board have decided that the General Managers themselves may take a decision to allow request transfer of non-gazetted railway employees on out-of-turn basis. Such requests may, however, be considered only in rare cases where NO C has been received from accepting Railway and have been approved by competent authority in the parent Railway. In each such case reasons for giving the approval should be recorded on file It is also stated to use “COMPTRAN” soft-ware to register and monitor all the cases of Inter-Railway Request Transfer as advised under Board’s letter No. ERP/Portal-Transfer/2013 dated 08 08.2018. 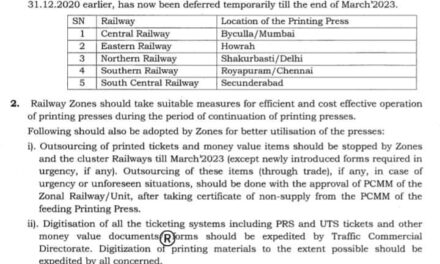 Closure of printing press deferred till March 2023 Railway Board Order

Secret Ballot Election (for short ‘SBE-2020’) For verification of membership of Trade Unions(i.e.TUs) in order to grant them recognition on Zonal Railways – reg “Final Modalities -2020