Spl.General Council of SWRMU held from 3rd to 5th Feb-2016 at Hubballi

Spl.General Council of SWRMU held from 3rd to 5th Feb-2016 at Hubballi

Sub: Spl.General Council of SWRMU held from 3rd to 5th Feb-2016 at Hubballi for deliberation and passing of Resolution for launching Indefinite strike from first week of March 2016.

The South Western Railway Mazdoor Union held a Special General Council meeting at Hubballi from 3rd to 5th February, 2016 in Main Union Office to pass the Resolution to go for the Indefinite Strike from 1st week of March 2016.

This General Council discussed elaborately on the 26-Charter of Demands of the Railwaymen which is not at all negotiated for any settlement till date by the Cabinet Secretary under the Joint Consultative Machinery (JCM) scheme and unanimously resolved that, if the Government fails to fulfil the demands by negotiations through JCM scheme, it has been decided to conduct Strike Ballot on 11th & 12th Feb, 2016 & ‘Indefinite Strike’ from 1st week of March, 2016 as per Call given by National Joint Council of Action (NJCA) & All India Railwaymen’s Federation (AIRF).[copy of resolution enclosed].

On 3rd February, 2016, more than 4,000 employees gathered and held a rally commencing from EMD Diesel Shed via the New Zonal Headquarters office, General Stores Department and Railway Workshop through Dr.Ambedkar Circle and passing through Divisional Office to the General Manager’s Office. The Rally later returned to Union Main Office and the Union Leaders addressed the gathering. The meeting was presided over by Com. R.R.Naik, Zonal President. All the Divisional Office Bearers of Hubballi division, Bengaluru Division, Mysuru division and Workshop Division attended and railwaymen from all over the S.W.Rly participated. Slogan was given against the Central Government anti-labour attitude of the government.

While addressing the rally on the Charter of Demands the General Secretary Com. Dr.A.M.D’cruz, said that discussion was taken at various levels, but nothing settled and also officially the JCM meeting was not held for last 7 years to negotiate various problems.

After the Rally, the Delegate session of Special General Council was held, wherein the delegates deliberated on the pending demands and seriously taking note of the attitude of the Government of India, in light of which the NJCA & AIRF have taken decision to conduct strike ballot on 11th & 12th Feb and commence Indefinite strike from first week of March, 2016, the Special General Council unanimously expressed Solidarity to go for indefinite strike and passed the Resolution.

A Memorandum was also submitted to the General Manager/SWR for forwarding to Ministry of Railways/Government of India. (Copy enclosed)

Copy of Memorandum, Copy of Resolution, Wall posters brought out on the occasion, Press Clippings and photos are sent herewith for kind information ( through Speed Post).

In Pics – Rally organized by NRMU on the demands of workers 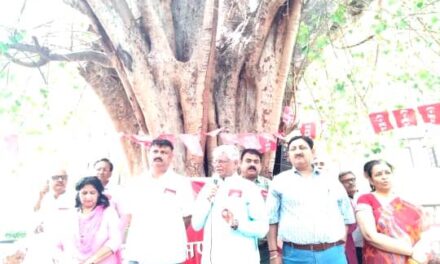