Zonal Railways may please refer to Board’s letter quoted in the reference, in terms of which employees working in grades lower than the grades for which GDCE is held, are eligible to appear in the selection held for GDCE

Please acknowledge receipt of this letter.

Revised Summary Record Note of Discussions held by Board (CRB, MS & FC) with Federations (AI.RF & NFIR) on 01.10.2015 on issues raised by Federations.

Notice for AIRF Working Committee Meeting, scheduled to be held on 13-14 February, 2017 at Madgaon 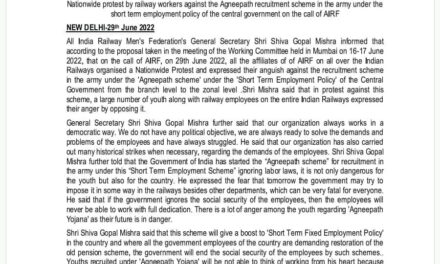