Brief on the meeting of the NAC held on 29.05.2015 under the chairmanship of Jt. Secretary

No.AIRF/NAC Dated: May 29, 2015
The General Secretaries,
All Affiliated Unions,
Dear Comrades,
Sub: Brief on the meeting of the NAC held today under the chairmanship of Jt. Secretary(E), DoP&T, Government of India

As per notification No.11/1/2015-JCA dated 12.05.2015 of the DoP&T(Government of India), meeting of the National Anomaly Committee was held today under the Chairmanship of Jt. Secretary(Estt.), Jt. Secretary(Pers.) and officials from other establishments and Ministry of Railways were also present.

At the outset, Secretary(Staff Side), National Council(JCM), Myself, expressed anguish for communication gap and non-finalization of the issues raised by the Staff Side JCM at various levels, and that is the reason, the staff working in the Central Government is quite agitated.

I also mentioned that, when we met the Secretary, DoP&T, we were given assurance that very soon meeting of the NC/JCM would be held, but unfortunately could not.

NAC was formed seven years back, and up-till now whatsoever had been agreed, that is not implemented, and wherever disagreement, items have not been sent for arbitration. Out of 60 items, only 48 were discussed, and most of them are under review, and there are 12 items which are still pending.

Agenda Items Item No.1 – Review of MACP to GP of Rs.2000 where there is no such grade pay in Railways Though the Official Side was not in the mood to make any change, but on the insistence of the Staff Side, they agreed to review the matter once again.

Item No.4 – Grant of minimum entry pay meant for Direct Recruits to Promotees There had been lots of arguments and when the Staff Side insisted that, in the JCM Scheme, once the items have been finalized and we reach to an agreement in the Standing Committee, there is no provision of referring back the issue to JCM again. The Secretary Staff Side told pointblank to the Official Side that we are not going to yield on this issue, and if the Official Side feels that the Hon’ble Finance Minister has some specific objection for implementing this issue where Promotee should get bottom of the grade where Direct Recruitment is available, we would like our meeting with Hon’ble Finance Minister. The Official Side agreed that they will put up the case to the competent authority to approach the Hon’ble Finance Minister once again. 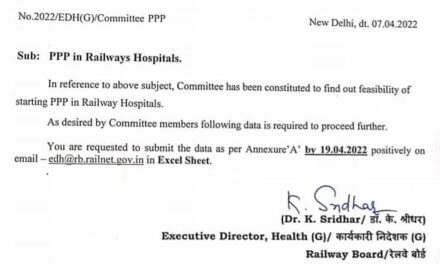 Observance of 12th January, 2018 as “Youth Diwas” all over the Indian Railways