Sub:
Ref: Ministry of Railway’s letter of even number dated 28-02-2005.
Both the federations (AIRF & NFIR) have raised the issue regarding admissibility of two additional increments to the Nursing Staff possessing B.Sc. (Nursing) qualification.
On this issue references have been received from a few Railways seeking clarification whether the Nursing staff possessing B.Sc. (Nursing) are entitled for the benefit of two additional increments after the implementation of 5th CPC pay scales w.e.f. 01-01-1996.
2. In this context it is stated that on implementation of Fourth CPC pay scales, Ministry of Health and Family Welfare in supersession of Ministry of Finance’s OM dated 08-5-1975, issued OM dated 23-3-1988 issued instructions regarding grant of additional increments to Nursing Staff. The said OM provides for grant of two increments (non-absorbable) to the Nursing Staff holding Bsc. Nursing as additional qualification w.e.f.
(a) 1-10-1986 to those Nursing Staff in servJCe who possess the Degree/Post Graduate Degree in Nursing as on that date;
(b) the date of appointment to those who possess the Degree/PostGraduate Degree in Nursing qualification, who are recruited after 1-10-1986;
(c) the date of publication of result of the Degree/Post-Graduate Degree in Nursing for those in service who acquire the Degree/Post-Graduate Degree qualification after 1-10-1986.

2.1. The OM dated 23-3-1988 of Ministry of Health and Family Welfare further stipulates that only two additional non-absorbable increments will be admissible to a nurse in a particular grade where possession of such qualifications are not required as per Recruitment Rules and that grant of these increments are subject to the condition that the concerned Nursing Staff is not required to possess the qualification, for which the increment is claimed, as a condition of employment and that they have not been allowed a higher initial pay on account of the said qualification prior to or on or after 01-10-1986.
3. Subsequently, on implementation of Fifth CPC pay scales, the aforementioned Scheme regarding grant of two additional increments to the Nursing Staff holding B.Sc. Nursing as additional qualification was reviewed and in consultation with Ministry of Health and Family Welfare, it was decided to continue the Scheme. Necessary instructions in this regard were issued vide Board’s letter dated 28-2-2005 (RBE No. 37/2005). Evidently, the said Scheme for grant of two additional increments has continued even after 01-01-1996 without any change in the terms and conditions as applicable earlier.
4. This has the concurrence of the Finance Directorate of the Ministry of Railways.

Arbitrary reduction of incentive bonus to SEs and SSEs – withdrawal of Board’s decision – urged and DC/JCM Item No. 02/2005 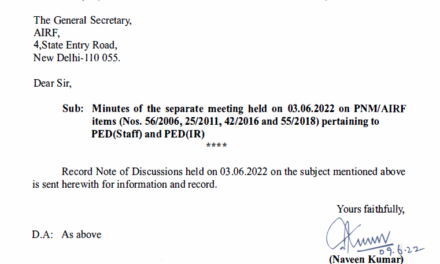