Government of Scotland to take over Railways from private operators from 1st April, 2022  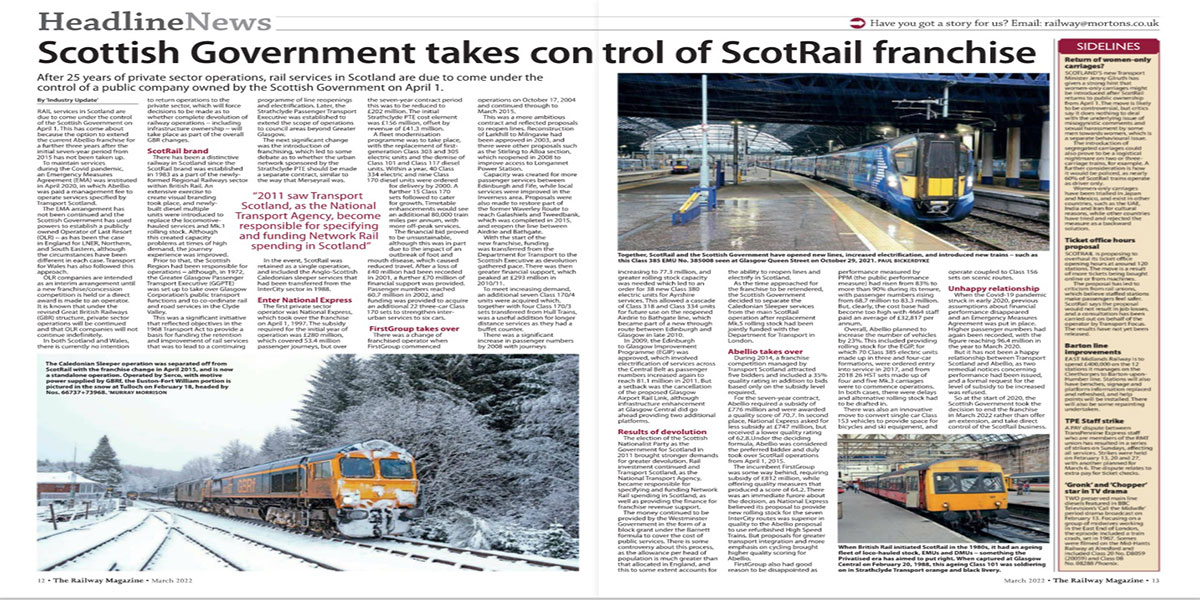 The Scottish Government has announced that all train services in Scotland will be nationally owned by Friday 1 April 2022, with the incumbent company Abellio being forced to step down.

What does this mean?

Scottish trains were in fact temporarily nationalised to help the rail network operate during the pandemic with the Scottish Government offering £173.1m to provide transport links for key workers. This time, the Scottish Government is taking over the railway systems for the foreseeable future. Whilst the pandemic undeniably had a negative financial impact across the country, Dutch owned Abellio’s problems pre-date Covid-19. Abellio reported losses of £64.5 million in the 12 months prior to March 2020. During the first year of the pandemic rail usage in Scotland fell to just 8% of the pre-pandemic level leaving the company in greater financial difficulty. The Government decided not to renew Abellio’s contract past 2022, stating that “the current franchising system is not fit for purpose”.

There will be no jobs lost through this takeover as all current Abellio employees will retain their positions. There is hope that nationalising the rail systems in Scotland will provide an opportunity to strengthen and improve train services across the country. Scotland’s transport minister Jenny Gilruth stated the takeover will allow services to be “affordable, sustainable and customer-focused”. The SNP has also highlighted that nationalisation provides the perfect opportunity to control decarbonisation efforts. It has pledged that railways in Scotland will be decarbonised by 2035.

In her statement to the Scottish Parliament, Gilruth emphasised her desire to make the railway network safer for women and outlined her collaborative approach to solve this issue. The minister wants to consult with women to “better understand their experiences and… improve our public transport systems”. It’s clear the Government has big plans to overhaul the disorganisation left by Abellio.

However, not all Scottish parties share the SNP’s enthusiasm over nationalisation. Taking over train services will require strategic and logistical planning, something the Scottish Liberal Democrats fear the Government is not prepared for. The Scottish Conservatives have also asserted that “passengers need a commitment that fares will come down”.

Questions have been raised over how this takeover fits into the wider developments for railways across the UK. The UK Government has recently announced its plan to create a national body called Great British Railways (GBR) which will control railway infrastructure including tracks and train tickets. It appears that in the future, ScotRail will work together with the new GBR body in a UK-wide railway system which will be closely controlled by the UK Government. Whilst implementing the GBR body will not result in a full blown renationalisation of the UK railway systems, the UK Government will have an increased level of control over services. The UK Government will therefore no doubt be looking to see how the Scottish Government gets on before their own management plans roll in.

DC/JCM Item No. 3/2006-Implementation of negotiated settlement reached between the Federations

Historic 8th of May, Remembering Martyrs of 1974 Railway Strike