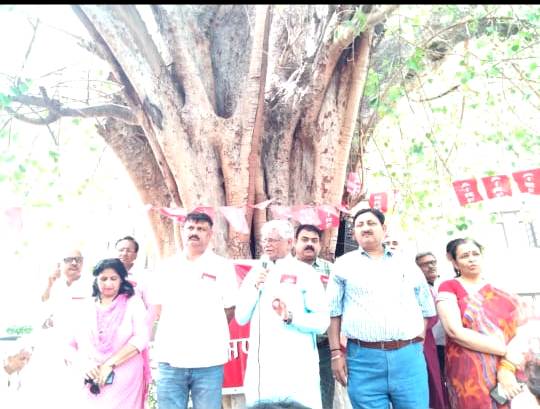 Nationwide Demonstration on the call of AIRF against the abolition of posts
NEW DELHI-27th May 2022
On the call of All India Railway Men’s Federation against the anti labour order by the Railway Board to abolish 50% vacant posts of non-safety, a massive protest demonstration was organized under the banner of AIRF at all the administrative offices of the railways during the lunch hour. . A large number of Railway employees led by the affiliated unions of AIRF participated in this demonstration across the country.
Addressing a massive demonstration organized at General Manager’s Office, Northern Railway, New Delhi, General Secretary Shri Shiva Gopal Mishra said that Railway Board has written a letter to all Zonal Railways and has issued a Tughlaqi order to abolish 50 percent posts of non-safety category immediately.
Which is absolutely wrong, how can the Railway Board give such orders without talking to the employees’ unions. He said that AIRF strongly opposes this order of Railway Board.
Shri Mishra further said that there is a huge shortage of such employees in the Railways. There is a heavy work load on the employees, due to which the employees are working under heavy stress and are being forced to commit suicide and this order to eliminate more posts on them will force the employees to commit suicide in more numbers. He said that today on the call of AIRF, a massive protest was organized on the entire Indian Railways against this order of Railway Board and this order of Railway Board was strongly condemned.
A large number of employees participated in the demonstration organized in New Delhi at Tughlakabad, New Delhi Railway Station, Divisional Railway Manager’s Office, Sarai Rohilla, Old Delhi Railway Station etc. In the performance organized at General Manager’s Office, New Delhi, along with General Secretary Shri Shiva Gopal Mishra, Central Vice President Smt. Praveena Singh, Divisional Secretary of Headquarter division Shri S K Saini, Divisional President Alok Mishra, Accounts Divisional Secretary Shri Upender Singh, with huge employees of Accounts & Headquarter division was present.

Bullet train or modernization, railway will be run by rail employees – AIRF