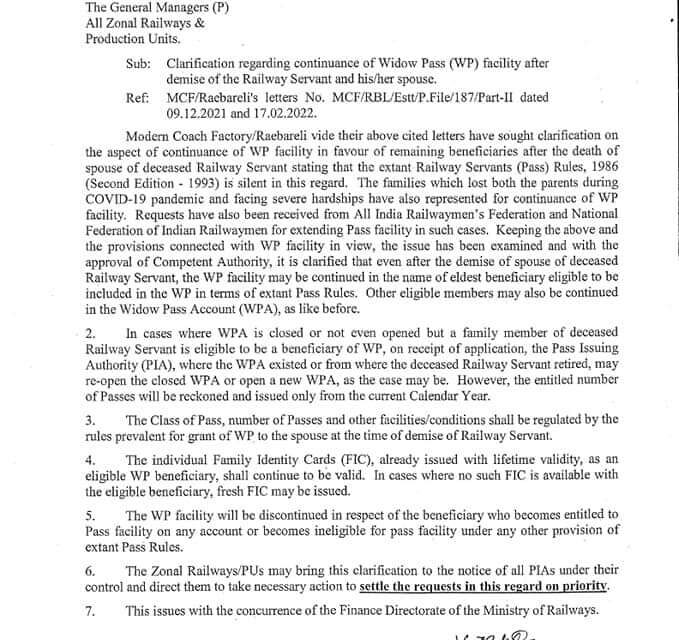 No. 2022/E(W)/01/09 NEW DELHI 10.06.2022
The General Managers (P)
All Zonal Railways &
Production Units.
Sub:- Clarification regarding continuance of widow Pass(WP) facility after demise of the Railway Servant and his/her spouse.
Ref: MCF/Raebareli’s letters No. MCF/RBL/Estt/P.File/187/Part-II dated 19.12.2021 and 17.02.2022 .
Modern Conch Factory/Rae Bareli vide their above cited letters have sought clarification on the aspect of continuance of WP facility in favour of remaining beneficiaries after the death of spouse of deceased Railway Servant stating that the extant Railway Servants(Pass) Rules, 1986 (Second Edition -1993) is silient in this regard. The families which lost both the parents during Covid-19 pandemic and facing severe hardshops have also represented for continuance of WP facility. Requests have also been received from all All India Railwaymen’s Federation and National Federation of Indian Railwaymen for extending pass facility in such cases. Keeping the above and the provisions of Competent Authority, it is clarified that even after the demise of spouse of deceased Railway Servant, the WP facility may be continued in the name of eldest beneficiary eligible to be included in the WP in terms of extant pass rules. Older eligible members may also be continued in the widow pass Account (WPA), as like before.

Observance of “Black Day” on 4th October, 2018 – Restoration of LARSGESS

Extension of the scheme of hiring of para-medical categories in Group ‘C’ on contract basis – RBE No. 88/2019